Muchisimas gracias to all who made my trip to Seattle so memorable and fun. Randall, Nina, Linda, Gary, Leslie, Karen, Mary Beth, Jule and Nora. you people are all so dynamic; I look forward to working with you on something in the future. Woven together as we are now, perhaps we can begin weaving together an event: an exhibition of traditional textiles with a lecture about their history, contemporary works of art inspired by huipils, music which weaves together the old and the new, tequila tastings, perhaps all within the context of a Cinco de Mayo celebration or something. From your creative minds and generous hearts, something delicious is bound to happen.
Posted by Lena Bartula - Contemporary Huipils at 4:58 PM No comments:


“WOMEN’S BLOUSES, WOMEN’S HISTORIES; INTERNATIONAL DAY TO ELIMINATE VIOLENCE AGAINST WOMEN is observed on November 25.
Activities for San Miguel, 2009 include art exhibitions; screenings; readings, workshops, seminars, and talks; concerts, theatre; street dramas; and whatever YOU can dream up.

Your participation is not only welcome, it is needed. Please join us for this first event, as we commit to making our world a safer place for women.
50 pesos donation at the door provides seed money for the Nov. project.

email me at lenabartula@gmail.com
Posted by Lena Bartula - Contemporary Huipils at 12:18 PM No comments: 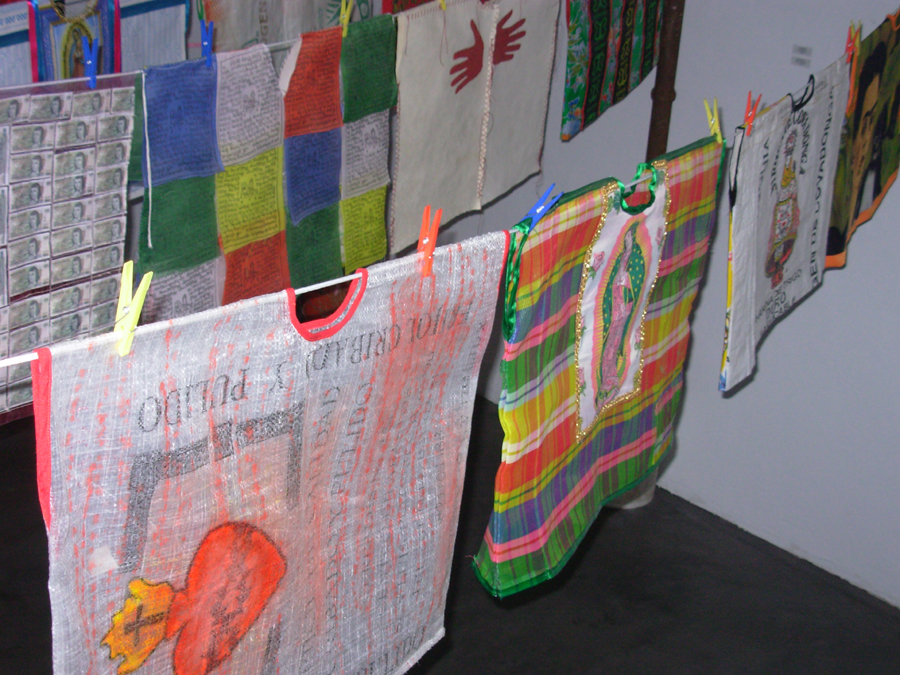 With recycled bags from corn or beans, market bags, lottery posters, oilcloth, found fabrics and images, bandanas, ribbons, I am creating contemporary huipils that illuminate the lives and stories of women who have been silenced, whether politically, emotionally or physically, women who stood for the right to an education or the right to decide their own fate, and women whose rights are nonexistent, denied by the intolerant culture in which they live. Each huipil or TORSO, as I call this series, represents a woman’s body, and in that, also symbolizes both cover up and uncovering. Through the materials I shine a light on women such as las vendadoras, the women who sell their wares in the mercados, or las frijoleras, women whose labor in the fields puts food on the tables of the world, and the victims of femicide in Juarez, growing in number since 1993. Individual women like Anna Mae Aquash, Minerva Mirabal, Sor Juana Ines de la Cruz, Christine de Pisan, Nadia Anjuman, or Comandante Ramona, recall not only their personal stories, but the epoch and society in which they lived. Mythical women like Corn Mother, Mother Nature and Tibet / Motherland are represented among legends, myths and deities who are also illuminated in this exhibition. 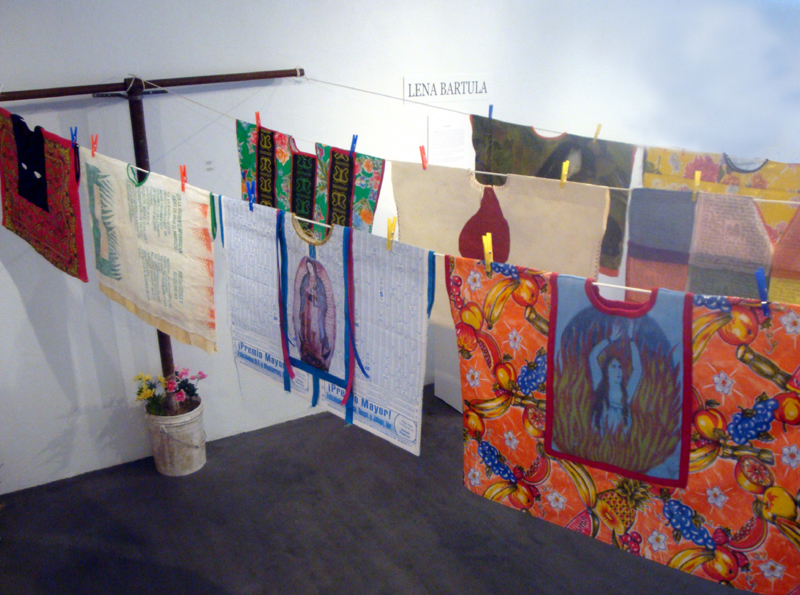 Art has the power to awaken our awareness, shining a light on problems that are otherwise too difficult to look at or talk about, and all too easy to deny. Violence against women is an increasingly major issue in our world, one which not only destroys families and entire communities but threatens the future of the human race. Out of this series, I am preparing a slide presentation to be shown this year, leading up to November 25, International Day for Elimination of Violence Against Women. My hope is to gather a group of artists here in San Miguel for a benefit exhibition during that week. If you would like to participate in some way, don't hesitate to email me, lenabartula@gmail.com.

In an upcoming exhibition at Sol y Luna Contemporary Gallery in Puerto Vallarta, the image of the huipil takes center stage. Opening January 28, 2009, it is titled “Enigmas,” because that is what huipils are for me. 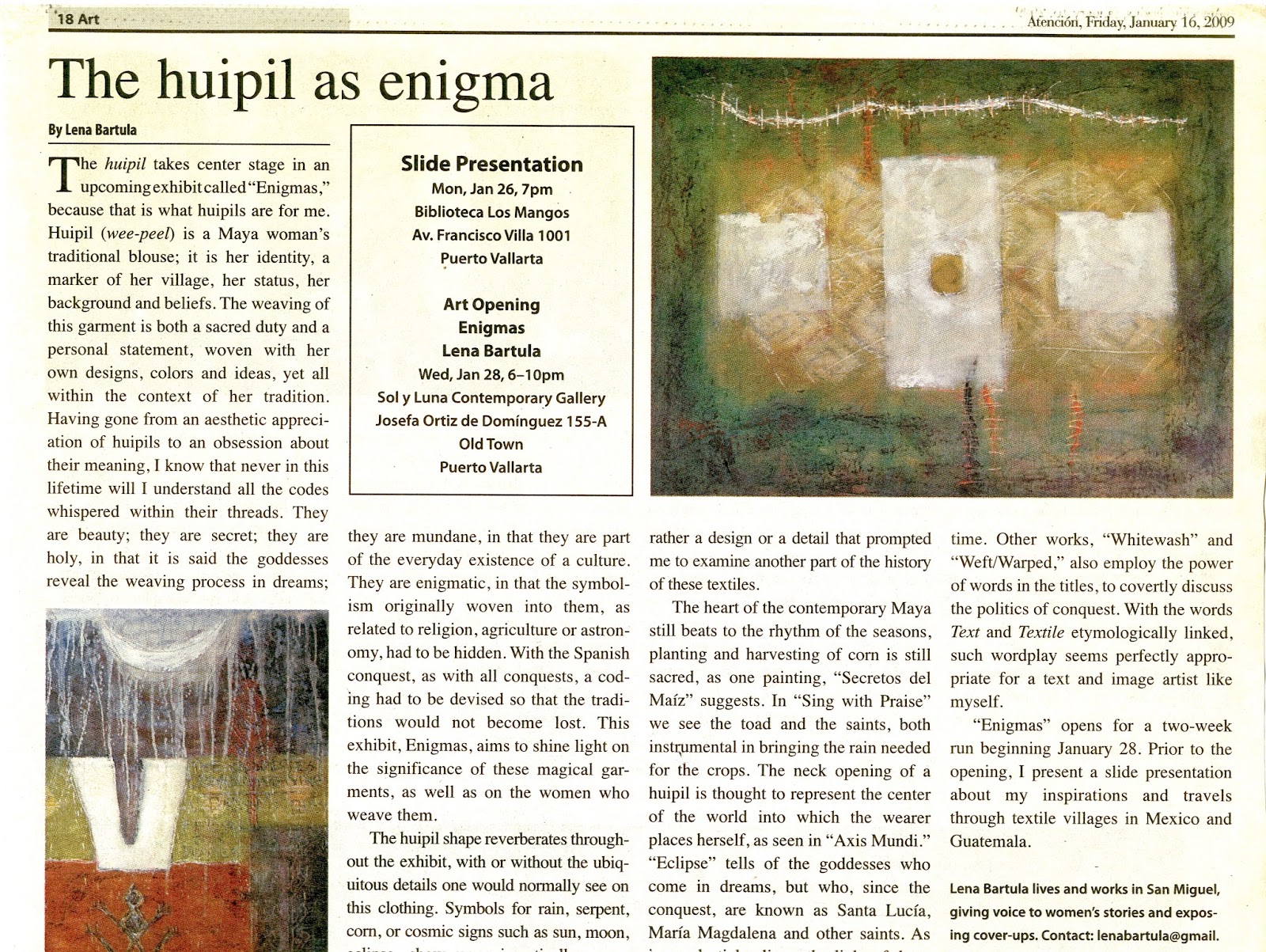 They are beauty, they are secrets, they are treasures, they are holy, in that it is said the goddesses reveal the weaving process in dreams, they are mundane in that they are part of the every day existence of a culture. Having gone from an aesthetic appreciation of them to an obsession about their meaning, I know that never in this lifetime will I understand all the designs whispered within their threads. This problem is not mine alone; information originally woven into huipils by indigenous peoples had to be hidden, especially if it related to their religion, agriculture, astronomy, and other sciences. With the Spanish conquest, all knowledge of such things was to be obliterated, and as with all conquests, a cover up had to be devised so that the traditions not be lost. In a patriarchal society that has continued to cover up not only the significance of these magical garments, but also the women who weave them, I strive in my art to shine a light on both.

Posted by Lena Bartula - Contemporary Huipils at 2:53 PM No comments:

Whispers in the Thread 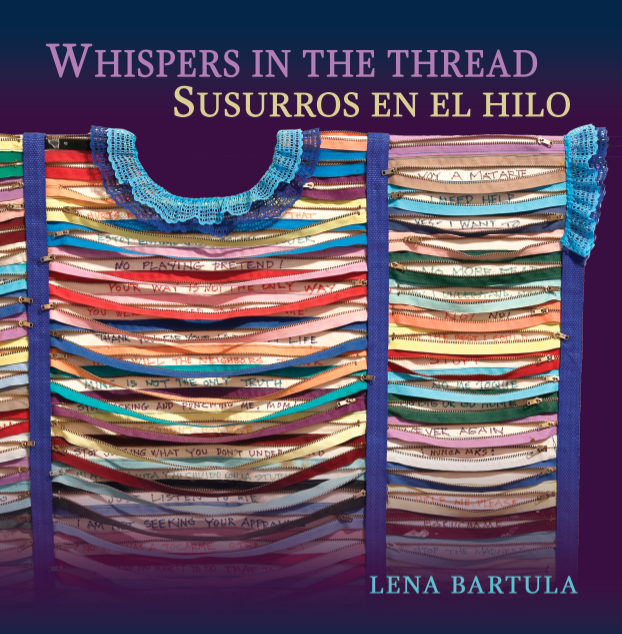 Praise for Whispers in the Thread

Whispers in the Thread is a camino, each page a step honoring the women who spin, weave, and stitch their threads of joy and struggle into lives that matter. By embracing the Mesoamerican dress called a huipil as the vessel for her vision and story, Lena Bartula creates a bold and unexpected body of contemporary art and process thinking. Images and text leap borders and sociopolitical abstractions. These modern adaptations of the huipil are woven with threads of social consciousness relevant in our world today. This book is a spirit guide for the rest of us.

Lena Bartula’s art is based on the huipil tradition and is both a modern interpretation and a tribute to the past. Her work is so complex that each piece has subtopics within subtopics – a weaving can be a fabric of pain and an installation can express injustice or joy. The intricacy and beauty of Bartula’s work is unique and belongs to the canon of what a garment – especially a woman’s garment - can mean.

Lena Bartula’s Whispers in the Thread, is in itself a work of art, and satisfies and astonishes on so many levels — aesthetically and intellectually, conceptually and spiritually. The huipil, the women’s ancient woven garment of Mesoamerica, is the perfect metaphor and palette upon which to create this beautifully provocative and edifying little tome.

Judith Cooper Haden, Photographer and Author;
Oaxaca the Spirit of Mexico,
Milpa: From Seed to Salsa/Ancient Ingredients for a Sustainable Future

Whispers in the Thread inquiries, questions and purchase.